My Baby’s Father Has Another Family 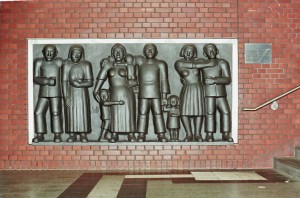 Here’s the scenario, the father of your baby, whom you thought was single, has another family. Now this is fundamentally different from a love-life situation where he doesn’t have another family.

Why? Because if he doesn’t have another family, which means he’s single, there exists the possibility that he could come back (remote or not) and you could re-establish an intact family.

Whether or not you’d take him back after abandoning you is another matter. The point is he’s free. He’s probably out there like most immature men who decide to make a baby, hanging with his friends, doing teenage guy kinds of things. If after awhile he grows up and you’re still in love with him, you have your family.

If the guy has another family he’s been keeping secret from you, and probably everybody else you know, this happy ending is a lot harder, or maybe impossible, to achieve. In my experience once you get pregnant, give birth, or find out about the hidden family, at one of these points there is a good possibility your family will be abandoned physically, emotionally, and maybe even financially.

First and foremost you’ve got to get yourself over the shock. Most women who ‘freak-out’ had no real awareness this was happening. Now life can be complicated, I have met women who knew in the back of their minds that this kind of thing has happened, could happen, or would happen. Unfortunately, they tried their best to convince themselves otherwise.

Many people don’t see it coming, mostly because guys who abandon are masterful at hiding things about themselves they don’t want anyone to know. So the shock happens when you find out. Most women who are interested in forming a family will either be unable to regain trust or request that the father of their child leave the other family immediately. In most cases, leaving the other family is not really an option. Reason being, that family was usually started before yours with more durable attachments.

As a ‘victim’ of this kind of dishonesty and subterfuge, the second order of business is to regain your senses and ability to think. Once the shock is over and you’ve replayed a number of scenarios over and over in your mind, tried to unsuccessfully take on all the ‘blame’ yourself, and started to get used to the idea of single parenting, you’ll be needing to make some clearheaded decisions.

The first one is to promise (yourself) that you’ll take exceptionally good care of yourself in this time of need. You’ve been lied to, mistreated, and your self-esteem has been badly bruised. You can’t let this experience hurt and damage you more than it has to.

Next is to make sure you are making a good plan for the care of your child. What I mean is, whatever you decide to do from here on in has to have your baby figured into it. The simplest way to do this is to make sure he or she is getting what is needed. In this kind of situation the first item on the list is usually money. Remember the decision to go after financial support for your baby is never personal.

It’s not an act of revenge. It’s simply a mother’s way of taking care of her baby. In this case, this is made even more important by virtue of the fact that you’re being left to fend for yourself.

Of course, in some instances, you might be given financial support that is less than needed, inconsistent at best, and largely unpredictable. Having to track down payments when needed is no way to live for you and especially for your baby. Again, nothing personal. Just the business of ensuring that your baby gets what he or she needs.

As far as the psychological impact of this kind of situation is concerned, you have to be able to ‘limit’ the damage an abandonment of this kind can create in your mind. More specifically, it’s very important that you repair the impact this kind of thing will have on your love-life.

When I’ve said stuff like this to abandoned mothers in the past, they’re quick to remind me that the injury is fresh and they are not interested (perhaps ever) in some future love-life. I bring this up in order to start alerting a person to the dangers of long-term ’emotional defensiveness’ created (understandably) as a self-protective effort to never again be hurt by anybody.

What this frequently ends up being is a desperate act of swearing off love. Bad move. I’ll tell you why. Now we have two tragedies to contend with. It’s bad enough that you and your baby were abandoned in the ways I’ve described.

The good news is, the wisdom that made us put in a fail-safe called ‘learning,’ You can learn from your love-life mistakes and make a better love-life later on after you’ve healed. But not if you stay permanently hurt underneath and pissed off and defensive on the surface.

Your repair job is to reclaim your love-life from this crisis. To let anyone including the father of your baby take that away from you, in my humble opinion, is too heavy a price to pay when you’re a victim of this kind of mistreatment. The way to overcome this kind of hurt is to stop hoping to form a family with this person, grieve the loss, practice letting it go, get used to being a great single Mom, learn what you could have done differently, and get out there in the field of love wiser and stronger than before. Usually in that order.

Posted in Single Parent in Love