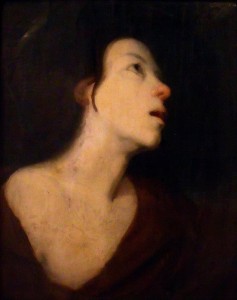 This post is about the possible effects of a ‘sick mother’ on a daughter’s adult love-life. My female patients often see a connection between the difficulty they are having in their love-lives and the fact of their own mother’s emotional sickness when they were growing up. This state of ‘sickness’ includes either or both physical and emotional sickness severe enough to compromise a mother’s ability to parent.

This post focuses on what a woman might experience with a mother who is sick and how it might influence her adult love-life. I’ve also organized our treatment of this topic into three parts: your emotional need for your mother, what you should learn from your mother, and what parts of your mother’s personality you might identify with.

Women: In terms of separating from a mother and setting up one’s own individual existence, I think daughters have the hardest time of all. The reason for this is a daughter is the closest emotionally to her mother whether there is love or not in their relationship. Daughters and mothers are not only close by virtue of a daughter’s primary need for her mother’s love but also because of the same sex identification that takes place in their relationship.

Sons and their fathers certainly identify, but daughters and their mothers do it more deeply and with less of an expectation of eventual separation. This complication is responsible for much of the difficulty women have individuating (becoming an individual) in relationship to their mothers. If your mother is sick this task of separating and individuating yourself into mature adulthood is made even more difficult. Why?

Generally speaking, a sick mother looks to her daughter to assume a care-taking role while disguising her own emotional needs behind a devotion to her mother’s health and welfare. This self-sacrifice is expected and reinforced. If it is resisted or refused there will be plenty of conflict and struggle in their relationship and in the family.

When a daughter is rebellious she is usually attempting to break free of this binding influence to avoid what can feel like an indentured servitude with loads of self-sacrifice included. The hard part about this is the trouble daughters will encounter rebelling against irrational authority in families and cultures that don’t expect or condone this kind of behavior. The alternative of course is the practice of care-taking controlled by a dependent mother until it becomes a solidified personality the daughter will bring with her into her own love-life.

Care-taking daughters now as care-taking women make excellent mothers, at least at the beginning. Their Achilles heel, if you will, is knowing when to let go of their charges when their charges grow up. As lovers and wives they tend to encounter a few more difficulties. Let’s outline some of the common problems ‘super-moms’ encounter in both of these ‘roles.’ The mothering role for the care-taking daughter turned mother is easy enough because, you guessed it, care-taking has become part of her personality .

They do it seamlessly and their children appreciate the reliability and sensitivity when young. It’s when the kids grow up and start separating emotionally that some adjustment in levels of control are needed. At even more advanced ages, children now young adults may adamantly refuse the care being offered. In fact in most instances it feels like control and adult child fight against it. With lovers and husbands this problem is magnified further.

Most men, regardless of how dependent or dysfunctional they might be, resist if not outgrow their need for a ‘mothering’ lover. Most of these men are people who tried to find ways to make up for childhood and adolescent losses by introducing these needs into their adult love relationship. Since the chance of successfully satisfying needs for parenting love in adulthood are pretty slim, the instability of this arrangement usually leads to efforts to equalize or reverse the care giving and taking in the relationship.

This is where it gets dicy. Care-taking lovers or wives, nurtured into this personality with the help of their sick mothers, have a difficult time giving it up. And it’s not just familiarity and habit, it has a lot to do with exposing underlying needs for love that originate from the daughter-mother relationship and have remained unsatisfied and out of sight. They will try to avoid this at all costs with rigid care-giving even when their own needs are clamoring to emerge.

Again the great hope for all devoted care-givers is, if they do it diligently enough it will be returned someday, at least in theory. You can see how the outcome for a daughter’s love-life reared in this tradition is bound to be fraught with conflict and disappointment.

Mothers certainly have lots to teach their daughters about love. Once again, these lessons of love are taught not only in conversation but also through the powers of observation and intuition. When a mother is sick and dysfunctional, this task as you can imagine is much harder to accomplish. How can a sick mother teach a vibrant growing daughter about love?

What commonly happens is a daughter gets the message that love relationships can be hurtful if they in any way threaten the dependency between daughter and mother and the primacy of the family of origin. Since the chances of finding a lover that will integrate into this emotional arrangement is challenging, plenty of the daughter’s love-life experiences will support the warnings provided.

If a daughter has an ample amount of spirit and goes looking for guidance secretly or publicly beyond the daughter-mother relationship, she’ll most likely be interested in procuring the skills involved in being independent. Unfortunately in this kind of family setting, the word independent when used to describe a daughter is considered unacceptable.

With a little bit of effort, and loads of guilt management, finding a female tutor or two to provide lessons in love won’t be too difficult. If there are matured women in the family of origin that’s the easiest route. Matured independent women beyond the family of origin are also available in many different settings. The point is, if a daughter is courageous enough to buck the dependent family system she can expect a rough ride for a while with the potential for considerable growth later on.

One particularly valuable love-life lesson is learning how to discriminate between men who know how to treat a woman and those that don’t. Another involves encouragement to speak up for oneself in a love relationship. And of course the old tried and true, how to respect and take good care of yourself when you’re independent by remaining independent in a love relationship. Unfortunately, excessive dosages of defensive independence can lead to difficulty letting go and being vulnerable with a lover. Damned if you do, damned if you don’t, right?

Fighting means that you are not going to lose yourself without a fight. The other two options require that you give up yourself to your mother’s sickness either as a care-taker or sick woman yourself. Either way, you don’t get to be yourself in your family of origin, your love-life, or anywhere else for that matter. Now fighting for your freedom comes in many different forms and has a few interesting possibilities in it. What you have to watch out for, of course, is self-destruction. If you can manage to keep yourself healthy and safe, your fight will further your ability to separate yourself from your mother’s sickness.

What you’ll need to eventually learn, hopefully sooner than later, is your fight is not with something out there. No, your fight is always with something in there! Something inside of you. Your fight is really with your unresolved need for your mother’s love. When a daughter’s mother is sick, the need for her love is magnified. We already know that, right? What is also enflamed is the hope of satisfying this need in adulthood.

If this remains your focus, the chances are great that sickness will be a part of your personality either in yourself as the sick daughter or in your choice of men. Fighting against this identification is the healthiest option. So we’ve come full circle, I made the point at the beginning of this post that woman have a harder time of it when it comes to separating from a sick same-sexed parent. At this point in my life, when I see a woman fighting something or someone, I think about why and how she’s trying to set herself free in some way. This helps me relate to and understand those female freedom fighters I meet in my work.  Dr. T. Jordan

Posted in Love-Life Class, Preparing for Love, Your Family