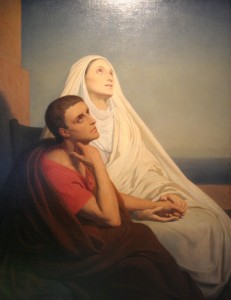 You married a man who has not yet separated emotionally from his mother. How can you tell? One very obvious sign is she (mother) will be trying to control her son, you, your marriage, up close and from a distance not long after you’ve married her son.

The message to you, his wife (or lover, if you want to drop the married part) is, you can marry my son but I stay number one in his emotional life.

Can you tell there is an underlying emotional maybe physical competition going on in this message? Of course you can. It’s pretty obvious.

The problem is, your husband has not yet left his mother. You see it’s a pretty basic formula. If you don’t leave your mother you don’t have the emotional space to be truly married.

When you are truly married you are committed 100% to another woman, your wife/lover. You’ve left one woman (mom) to fully commit to another (wife/lover).

The complication from the son’s side is, not wanting to let go of his mother. Some men reach adulthood but they are not yet finished with their mothers. I would recommend to such a man that he not get married until he is ready to ‘divorce’ his mother. If my advice is heeded things could turn out OK.

The plan is, stay bonded to mom until such time that you are convinced that it is time to separate, meaning go off and commit to another woman. This other woman, your wife, in effect becomes #1 in your new life. Now you’re truly married.

And by the way, your marriage has a better chance of surviving if this more complete commitment has occurred. When your mother-in-law is still pulling the strings on her son, things can get pretty dicey especially when there is conflict between you and your husband.

You see, the mother who hangs onto her son past the time she is supposed to is expressing a certain kind of ‘narcissism.’ The narcissistic mother is trying to cure her problems within herself by hanging onto and expecting emotional things from her adult son.

There’s a certain selfish, perhaps self-indulgent quality to this. She is really only thinking of her own needs and not the needs of her son or her daughter-in-law for that matter. You can get married, but that doesn’t mean you belong to anyone but ME.

Now you have a dependent son and a narcissistic mother. Perfect fit. This co-dependent arrangement when it hits adulthood is bound to create dysfunction in both. The dysfunction often shows up the clearest in their relationships with others.

A narcissistic mother’s marriage (worse if she doesn’t have a husband) often suffers when unhealthy triangles dominate her love life. The two most common triangles are: son-mother-father and wife-son-mother.

When the triangle consists of son-wife-mother, the narcissistic mother’s control in her son’s marriage is bound to create marital problems for him and his wife. This triangle indicates that there are two women vying for one man. This never works out well. Conflicts increase over time and allegiances are strained.

Of course this kind of emotional arrangement can get pretty complicated when her son’s wife is trying to get her mother-in-law’s ‘love.’ A lot of people are psychologically immature when they get married and try to compensate for what they didn’t get in childhood (love) now from their spouse’s family. This is quite common in contemporary marriages.

Problem is, it’s bound to be disappointing when your mother-in-law is narcissistic. Number one, she has little or nothing to give, and number two, you (wife) are the competitor (in her mind at least) for her son’s adoration and affections.

Number three, unfortunately, you can’t really make up for past love life disappointment by getting an adult person to ‘parent’ you. It’s healthier to heal the hurt as loss and learn how to make the best life for yourself with mature forms of love as an adult person.

A son’s efforts to ‘make peace’ between his wife and his mother, while walking the ‘line’ between them, is quite demanding. He’s bound to do a lot of fire fighting and repair work. If his wife is temperamental and expressive he’ll certainly have his hands full.

In my experience there’s always an underlying well of resentment in these men. Look at how much they have to pay attention to everyone else’s needs while sacrificing their own. What they don’t realize is, they have a right to a life of their own. Parenting is supposed to be a time-limited function and we are not supposed to nurture our own parents. We are supposed to put a big part of the love we have inside into our own lives.

In my experience, once sons in this trap start feeling bad and looking for a way out, this idea of having personal choice and rights has the potential of putting a pretty healthy fire in their bellies. From then on it becomes a matter of gaining personal freedom and owning your own love life.

If his marriage survives his separation from his mother (guilt), he and his wife will be able to have more of the marriage they dreamed of. And mom gets a chance to go fix her own marriage.

Posted in Marital Issues, Your Family