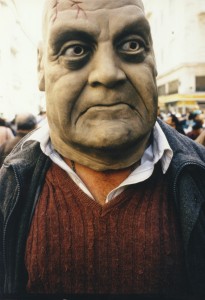 The first assumption we have to make is that she (your lover) is probably at an age where her parents and she are still very much ‘connected.’ Her autonomy as an individual has not quite yet crystallized apart from and fully independent of her parents. The best sign that this is no longer the case is when a person is able to love whomever he or she pleases despite whatever family criticism comes.

There’s a freedom in being able to make your own love choice, whether or not the choice is good or bad for you. A person should have the ‘right’ to pick his or her own lover. Whether or not you decide to heed someone else’s advise on matters of your heart should be entirely up to you.

OK, so you’re in love with a woman who is still young enough to be ‘protected’ by her parents. What to do when her parents don’t like you? Now you have to ask yourself, and an honest answer is necessary here, did I do anything to deserve their dislike? If the answer is a sincere ‘no,’ (and you don’t look like the guy to my left) then the problem is not in you.

The problem is in her parents. Obvious? Right, now comes the hard part, what to do about it? If you decide to address the problem head on, there’s hope for you. Is that like committing suicide? Some people might think addressing the problem head on is exactly that, suicide. Not me.

If you run away from the problem, try to avoid it, try to have a relationship with your young lover without dealing with the parents she is still dependent upon, you’re headed a likely failure. Chances are you’ll be swimming against the current. Don’t forget, they are still quite powerful when it comes to your lover’s (their daughter’s) emotional life. At least for now.

So let’s say, you decide not to run away, but instead to bite the bullet and try to make peace. You get it into your head that you are going to try to show them who you really are. Hoping they will learn to love you if they get to really know you. How should you proceed?

First and foremost, you automatically get points for bravery. Running away from difficult situations does not strengthen you, only your fears. A head on approach would most likely involve a meeting of some kind. They are going to want to meet you (probably after some campaigning on your behalf by their daughter).

So they give in and consent to meet you, probably over dinner. Meeting someone over dinner, especially if you are expecting not to like that person very much, is basically something to do while you try to privately deal with your own thoughts and emotions in the meeting. It’s a little easier for people to eat together than have a face to face without the obstruction afforded by food and the rituals of eating. If nothing else, it cuts back on the intensity. It permits a little distance and a sense of civilized safety.

OK, so you accept the invitation and find yourself sitting at the dinner table with one or both parents and your lover (their daughter). Body language and eye contact are going to be important at this point. Your ‘gut’ will tell you whether or not the meeting is friendly and how friendly. Either way, remind yourself you have a right to be there simply because you love their daughter.

I would also remind myself that what you’ve chosen to do is a basically an exercise in bravery and it really doesn’t matter what they think. With this kind of attitude, you should make it to the ‘inquiry stage.’ This is when her parents start probing you trying to find out who you are and whether or not you’ll pass their litmus test as an acceptable person for their daughter to be in love with.

Now, if you’re trying to present yourself as someone they could or should like, you’re heading down the wrong path. Trying to be what you think they would like will surely throw you off balance. The only hope you have is to simply be yourself. Being yourself will allow you to be more relaxed and real.

If you try to be what you’re not you’re bound to project discomfort. If they don’t like who you are, you can’t control for that. At least they will respect you for being yourself under pressure. It’s easier to like someone later on when you respect him or her right now.

If you find yourself answering questions about your relationship with their daughter, try not to get defensive. Saying things that highlight how ‘special’ their daughter is will probably soften the atmosphere (and it won’t be a lie). Remember, they are attached to her and that attachment feels vulnerable because you want an attachment too.

Ultimately they are trying to protect the attachment they have with their daughter. The worst case scenario is when parents feel really threatened by their son’s or daughter’s potential lover. They might be simply unprepared to let her go right now. If that’s the case you’re being viewed as someone who has come to snatch something very precious away from them (their feeling).

If you find yourself in trouble, remember, one of the strongest, perhaps the strongest, allies you have is your sincere interest in who and what her parents are as people. Parents who are compelled to investigate and control their daughter’s love-life are really in need of love themselves. The type of love they need usually comes in the form of appreciation or acknowledgment that they are ‘special’ parents and have done a really good job raising their child. And that their child will always love them for it.

By the way, your interest in them as parents and people will shift the focus off of you, no matter how temporarily, and give you a breather. Beyond that, they could feel appreciated by you and even give you a ‘temporary’ pass into their daughter’s life. Once you’re in, the rest is up to you.