Take Him To Court For Child Support? 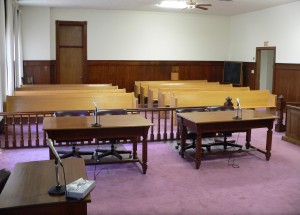 Here’s your situation, you had a baby and you are raising your child on your own. The father of your child does not give you child support and you’ve been reluctant to take him to court. Should you take him to family court? Let’s explore the pros and cons in your mind.

You’ve probably either avoided the issue altogether, or you’ve tried bugging him for money and you get ‘promises’ that are not kept. You might be told that he is trying to get the money together, or you’ll get it when he has it implying that you should feel guilt for pressuring him, or you could get an agreed upon amount for a few weeks or months then it trickles off to nothing again.

Or you could be told to buzz off and leave him alone. Whatever his response to your request for child support, the point is you’ll be begging for money without success, getting more and more frustrated as time goes on. Until you realize what you’re doing isn’t working.

Family court was created to avoid this scenario. Of course, if a man is dead set on avoiding child support, he can quit his job and hide his money while working off the books. Indeed, some men have gone to this extreme. They experience a request to support their child as an unrealistic imposition on them coupled with a belief that you (the mother of the baby) and your family should be exclusively responsible for financially rearing ‘your’ child.

Fathers who avoid their financial responsibility are difficult enough. But the most difficult father mixes avoidance with a threat of some kind of retaliation if you persist in your demand for money. The result of his intimidation is your fear that he will either physically hurt you or your baby or both of you.

Of course the hurt he is capable of might come in the form of ’emotionally abandoning’ your baby/child. What gets manipulated in your mind is your desire that your baby has a healthy development with two involved (but living separately) parents, so you don’t want to do anything that jeopardizes that.

In some instances, a mother’s greatest fear is the possibility that the father of her baby will become ‘more involved’ as a consequence of being pursued in court. Fears such as, he will want to see your baby more often or even take you to court for custody or regular visitation rights. The idea here is the you would be willing to sacrifice your baby’s finances to keep the undesirable abandoning father of your baby out of your life and your baby’s life.

In most instances this fear is irrational. Baring the peculiar possibility of an abandoning father trying to retaliate by ‘getting closer to his child,’ most abandoning fathers would not be looking to add more emotional responsibility to their lives beyond being forced to pay child support. Unless they are trying to stop paying child support by getting custody of their child.

Another complicating factor is the opinion of your (and possibly his) family of origin. You might have a self-sacrificing mother in your ear telling you,”I didn’t go after your father,” or “you don’t need a man’s financial support, you can do this on your own.”

In fact, these kinds of family influences often predict quite well what happens in the next generation. Understanding what is ‘limited’ about these viewpoints is an important first step in setting yourself free enough to make the best independent decisions possible for your baby.

Remember, your decision to take him to court for child support has nothing to do with him and you. It’s not an effort to get back at him for leaving you and your baby. It’s simply about getting the financial support your baby needs to grow up. To fortify your understanding of this issue and it’s importance, let’s talk a little bit about your ‘psychology’ (what makes you tick) as the self and baby sacrificing mom, and his ‘psychology’ (what makes him tick) as the deadbeat dad.

People like you who avoid taking the fathers of their babies to child support court are usually victims of emotional, physical, or financial abuse already in the relationship they had with the father of their baby. If this is not the case, then you’ve learned your self-sacrificing ways in your family of origin by observing through direct experience the lives of your family members.

Either way, you need to challenge what you’ve learned and believe you have the ‘right’ to get the financial support your child needs. This is your ‘maternal instinct’ coming back to life.

Now if you are accustomed to trying to ‘rehab’ your men, you will probably feel bad about asking him for money. Since you believe your ‘role’ is to take care of him, no matter how he treats you or your child, you’ll think taking him to court is ‘hurting’ him. You can see how this belief can interfere with getting the kind of financial support your child really needs.

Perhaps once you’ve gotten over this hurdle and started believing in your right to get your child’s money, you’ll ‘rehab’ your love-life and avoid hooking up with immature men who have a difficult time with this parenting responsibility. By the way, don’t forget orders of protection are available to respond to harassment and threats from the father of your baby. Your feeling of powerlessness fuels his ability to control you with fear.

How about the psychology of the dead-beat dad? We can safely assume that he has not been taught how to be responsible for a child. Sometimes men grow up in families where they learn how to avoid the responsibilities of child care due to absent parenting or bad examples.

There might even be a need to be taken care of by you mixed in there as well. Something like, an expectation that you will take care of him by taking full care of your baby together without asking for money or involvement.

The extreme forms of this may involve repeating family learned patterns of creating a baby who never gets to know his or her father. Where a man stays with a woman until she gets pregnant or delivers, then he’s gone because she can no longer give him the attention (100%) he craves and demands.

The important point in all of this is: if your baby’s father created the baby with you, it doesn’t matter what kind of relationship or lack of relationship you have with him, he’s financially responsible for that child. Taking him to family court is not something you are doing to get back at him. Taking him to family court is something you are doing for your baby.